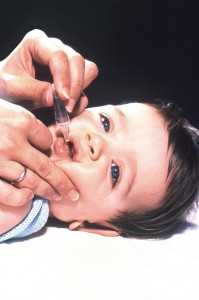 Throughout human history, war and political unrest have been associated with the spread of disease, often called the “third army”.  During the Napoleonic wars, 8 times more people in the British army died from disease than from battle wounds.  In our Civil War, 66% of the 660,000 deaths among soldiers were caused by pneumonia, typhoid, dysentery, and malaria.  Up to 70% of all deaths in countries affected by conflict are caused by infectious diseases.

When critical infrastructure is damaged or lost during conflict or unrest, surveillance and disease prevention and control measures stop, allowing undetected spread of disease. When large populations attempt to flee the violence it often results in overcrowded temporary settlements, lack of potable water supplies, overwhelmed sanitation and health systems, and poor nutrition- contributing to the spread of infectious diseases, including polio.

This week 22 cases of polio were reported in the Syria.  These are the first cases in Syria since 1999.  Most of the cases are below two years of age, and were un- or under-immunized. Estimated immunization rates in Syria have dropped from 91% to 68% since 2010, which is probably related to the political unrest in the region.

Until now, there were only three remaining countries that still had endemic polio:  Nigeria, Pakistan and Afghanistan.  Given the current fighting in Syria, large population movements across the region and the lower immunization coverage, there is an increased risk of further spread to other countries – another setback in the fight to eradicate polio.