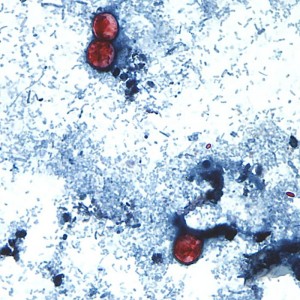 One tropical disease that you might have heard in the news lately is cyclosporiasis. This summer, cyclosporiasis was the cause of a multistate outbreak that hit Texas, Iowa and Nebraska the hardest.

Cyclosporiasis is a diarrheal illness caused by the single-celled protozoan, Cyclospora cayetanensis. Like most protozoa, people can become infected with Cyclospora by consuming food or water contaminated with the parasite. However, Cyclospora differs from other protozoa of its kind (like Cryptosporidium) because after being passed in the feces, it takes days to weeks at the right temperature to transform and become infectious for another person. Therefore, direct person-to-person spread or transmission from ingesting newly contaminated food or water is unlikely to happen.

Cyclosporiasis most commonly occurs in tropical and subtropical regions where outbreaks are frequently seasonal (such as summers and rainy season in Nepal). However, cyclosporiasis can occur in many countries. U.S. cases of infection also have been reported in persons who travel to these areas. Food-borne outbreaks of cyclosporiasis have been linked to various types of imported fresh produce, including raspberries, basil, snow peas, and in the most recent outbreak, salad mix. But the ultimate source is human, since man is the only known reservoir of this parasite.  Unfortunately, treatment of water or food with chlorine or iodine is unlikely to kill Cyclospora.

Some infected people will not show any symptoms of cyclosporiasis. Those who do experience symptoms will usually start to feel sick about a week after consuming the contaminated food or water. Symptoms of cyclosporiasis include watery diarrhea, cramping, and nausea. If not treated, the illness may last a few days to a month or longer, but usually resolves on its own. Symptoms may seem to go away and then return one or more times.

As of August 29, 636 cases of cyclosporiasis were reported to the CDC from 23 states in June and July. Health officials suspect more than one source of contamination.  Although the investigation is ongoing, the recommendation stands that consumers should continue to enjoy the health benefits of eating fresh produce and to follow general fruit and vegetable safety recommendations.